Local Government Units are empowered under Section 296 of the Local Government Code (LGC) to create indebtedness, and avail of credit facilities to finance local infrastructure and other socio-economic projects in accordance with the approved Local Development Plan and Public Investment Program. LGUs may avail of credit lines from government and private banks and lending institutions for the purpose of stabilizing local finances. Among others, LGUs are allowed to engage in deferred payments, contract loans, credits, and other forms of indebtedness to finance the construction, installation, improvement, expansion, operation, or maintenance of public facilities, infrastructure, housing projects, the acquisition of real property, and the implementation of other capital investment projects, subject to the terms and conditions as may be agreed upon by the LGU and the lender.

Given this opportunity, the Department of Finance as one of the oversight agencies of the LGUs, was in turn mandated to render technical assistance to LGUs in the availment of credit facilities, flotation of bonds, contracting of loans and issue guidelines for the purpose.

Under Section 324 of the LGC, the ceiling of LGU borrowing was defined allowing them to incur an appropriation for debt service amounting to 20% of its annual regular income.

Government regulates through ex-ante controls on LGU borrowings: i) An LGU must secure the Certificate of Net Debt Service Ceiling (NDSC) and Borrowing Capacity (BC) from BLGF and ii) A favourable Monetary Board Opinion from the BSP.

In 25 October 2016, DOF Department Oder No. 054.2016 was signed by Secretary Carlos G. Dominguez III streamlining the certification of Net Debt Service Ceiling and Borrowing Capacity of LGUs. The new DO has effectively reduced streamlined the certification of NDSC and BC of LGUs by the BLGF, by reducing the documentary requirements form twelve (12) to four (4), defining the specific computational parameters, and improved the process to ensure faster, accurate and efficient certification process. The BLGF has also devolved the process review of completeness and orderliness of documents to all BLGF Regional Offices, and for the initial computation of the NDSC and BC.

A. STREAMLINED DOCUMENTARY REQUIREMENTS AND ITS GENERAL GUIDELINES PER DOF DEPARTMENT ORDER (DO) No. 054.2016 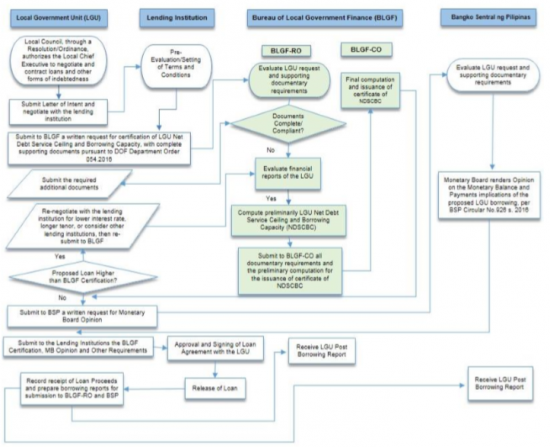 C. GUIDELINES IN PROCESSING REQUESTS FOR MONETARY BOARD OPINION ON THE MONETARY AND BALANCE OF PAYMENTS IMPLICATIONS OF PROPOSED DOMESTIC BORROWINGS BY GOVERNMENT ENTITY PER BSP CIRCULAR NO. 926 SERIES OF 2016

This website uses cookies to improve your experience while you navigate through the website. Out of these cookies, the cookies that are categorized as necessary are stored on your browser as they are essential for the working of basic functionalities of the website. We also use third-party cookies that help us analyze and understand how you use this website. These cookies will be stored in your browser only with your consent. You also have the option to opt-out of these cookies. But opting out of some of these cookies may have an effect on your browsing experience.
Necessary Always Enabled
Necessary cookies are absolutely essential for the website to function properly. This category only includes cookies that ensures basic functionalities and security features of the website. These cookies do not store any personal information.
Non-necessary
Any cookies that may not be particularly necessary for the website to function and is used specifically to collect user personal data via analytics, ads, other embedded contents are termed as non-necessary cookies. It is mandatory to procure user consent prior to running these cookies on your website.
SAVE & ACCEPT