Italian Embassy and DoF witness the Project Launching of BCDI and its partners in Ligao City, Albay

Bicol Region, Philippines – On September 17 (Thursday), the Bicol Consortium for Development Initiatives, Inc. (BCDI) formally launched their project for the protection and conservation of the Burias Pass, a body of water located in the province of Albay and known to be a huge fishing ground and a site for rare and endangered species.

The project, a “Partnership for the Sustainable Management of Municipal Waters in Burias Pass, Bicol Region for the Benefit of the Disadvantaged Sectors” involves and benefits 8 municipalities, namely, Ligao City, Pio Duran, Oas, and Libon in Albay Province, Donsol and Pilar in Sorsogon, and Claveria and San Pascual in the island province of Masbate.

The project aims to improve the quality of life of around 13,800 small fishermen in the communities surrounding Burias Pass through strengthened policy advocacy and the sustainable management of coastal and marine resources, regeneration of marine resources and near-shore forests, the improvement of access to clean water, and increased income levels among the small fishermen and their families.

This project is one of the community-based initiatives chosen under the Philippines-Italy Debt for Development Swap Program (PIDDS), a debt conversion program in accordance with the Programming Guidelines and Directions of the Italian Government Cooperation for 2011-2013. With a total project cost amounting to Php 35.2 million – Php 32.8 million of which is given as grant, while the remaining Php 2.4 million serves as the counterpart – this project is one of the two large projects funded under the Program. 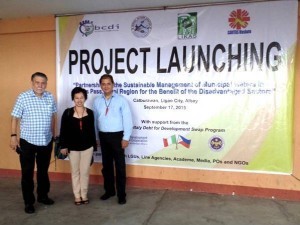 The Italian Ambassador, His Excellency Massimo Roscigno, and the Department of Finance (DoF), represented by Asst. Secretary Maria Edita Tan of the International Finance Group and members of the PIDDS Program Secretariat, witnessed the project launching held at Brgy. Catburawan, Ligao City, Albay.

In attendance were more than 100 partners and stakeholders, including the small fishers from the communities whom BCDI engaged as project partners and beneficiaries. Ms. Nonie P. Enolva, Marine Fisheries Resource Management Section Chief at the Bureau of Fisheries and Aquatic Resources (BFAR) Bicol Region provided the assembly with a situationer on the Burias Pass covering, among others, the state of biodiversity in the area and concerns surrounding the livelihood of the local fisherfolks. 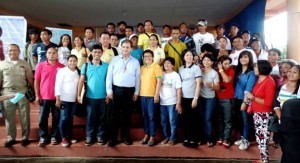 The project partners and stakeholders pose for a photo opportunity with H.E. Ambassador Massimo Roscigno. 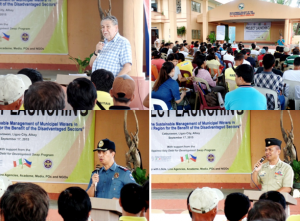 Local security forces, through the messages of support from Police Superintendent Mario Sanchez Meneses and Capt. Adelius Bordado of the Philippine Navy, acknowledged their crucial role in ensuring the success of the initiative. Aside from the BFAR, Asst. Regional Director for Technical Services Al Orolfo of the Department of Environment and Natural Resources (DENR) was also present, and representing the academe was Dr. Agnes Nepomuceno of the Bicol University.

This assembly also gave the local fisherfolks a unique opportunity to communicate the problems confronting them and the improved conditions they are aspiring for.

Through the stories shared by Frederick A. Timog of Cagmanaba, Oas, Albay; Roberto G. Alburo of Dao, Pilar, Sorsogon; and Jun Dela Cruz of Nonoc, Claveria, Masbate, the stakeholders developed a shared understanding of the realities of life in the communities surrounding Burias Pass, and with much hope in this partnership, the small fishers look forward to the time that they are no longer called a “disadvantaged” sector of society; rather, as one of the most valuable contributors to the Philippine economy. 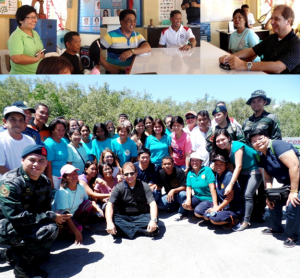 The next day, September 18 (Friday), Amb. Roscigno, together with the Program Secretariat and the BCDI Project Team, paid a visit to one of the participating barangays – Brgy. Punta, Waling-Waling, Dalisay (PWWD) in the municipality of Donsol, Sorsogon – for the opportunity to interact with the barangay leaders involved in project implementation and to see the PWWD Mangrove Park. Donsol Mayor Hon. Josephine A. Alcantara-Cruz accompanied Amb. Roscigno in a short tour by the municipal water sidelines.

End of submission of proposals

The Philippines-Italy Debt for Development Swap Team is pleased to announce that 126 proponents expressed their interest to avail of the development funds intended for environmental protection and poverty reduction.

Nevertheless, among the 126 proposals received, only 101 met the deadline and only these proposals will proceed to evaluation. An acknowledgement receipt was sent to the proponents whose proposals were received within the deadline. 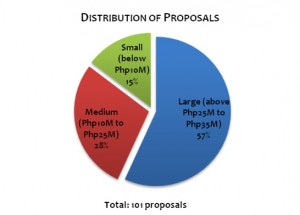 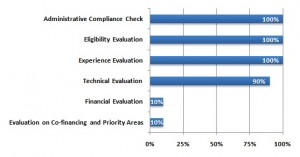 As of 12 December 2013, all of the qualified proposals already went through Administrative Compliance Check, Eligibility Evaluation and Experience Evaluation. About 90% of which are already finished with the Technical Evaluation and about 10% has gone under Financial, Co-Financing and Priority Areas Evaluation.

Almost all of the proposals are currently undergoing Technical, Financial , Co-financing and Priority Areas Evaluation.

Proponents will be contacted via email in case of clarifications to their submissions.

Announcement of qualified projects will be within the first quarter of 2014.